I want to Breakfree

As if 2020 and this world could get any crazier – Kayne West has thrown his hat into the ring for President.  Why not I suppose – prerequisites seem mental disorder and mountain sized sense of self.  Only thing working against him is he is not in his 70’s.  Kayne is no rocket scientist, but Eion is (sort of) and wants to see him launch. Don’t want to spend too much time on the US this edition, but I read that Mexico is quietly going about closing its borders to the USA for self protection.  Now there is a turn…

Speaking on Mexicans, on the domestic front, Victorians are being made to feel like pariah’s as their vertical cruise ships take off into the community orbit.  Hard not to feel a smidge of smugness, tainted with a lashing of pity.  Reality is that with just shy of 25% of Aussie GDP coming from Victoria (and most of that from Melbourne) it is a disaster.  That and a feeling that every State and Territory will have an outburst or two ahead – no doubt about it.

RBA released their latest Chart Pack this week.  Always like to have a look – they have the keys to the family car after all.

Picked just a few to call out.  Been reading a lot about house prices set to fall 15-25% in coming months.  Certainly not showing as yet: They are looking bloody strong.  Not to say that we will be immune.  Clearly a lack of supply (not many new listings) is helping – and maybe that is a good thing.

On the flipside Business Investment has a 95% correlation to the northern Australian coastline.  If that continues and we hit Bris-Vegas or Sydney we are all [email protected] Firstly I feel the need to keep highlighting they we are effectively in negative interest rates already.

The other one that struck me (whilst on correlations) is if you tipped the blue line (Aust 10 year bond rates) upside down, it would tie in nicely to the ASX index.  Makes sense – the cheaper money is then “cheaper” it is to buy equities.  As a semi intelligent illiterate, Trump knows that and explains why he always beats up on the US Fed Reserve for lower rates.

Chart also reminds me just how poorly the Financial Sector has performed in the last few years.

Mind you it has not been missed by many that more than $7B in bank share dividends have been “lost” in the last year.  That is a lot of loot missing from big and small investors. Whilst no observation really, the RBA chart pack does help us form a longer term view of the Aussie dollar.  It seems to bumble along largely happy against the Euro and Yen.  It also seems to have that “mean reversion” back towards 75-80 cents against the USD over time.  We have called AUD higher in coming weeks, and so far we are on the money.   Sixty Niner and 1/2 as we write. Bit-coin and blockchain are buzz words that my head is not fully around yet.  But gold is another matter.

Wouldn’t mind just touching on why gold has rallied so hard in 2020…and if it has further to run. 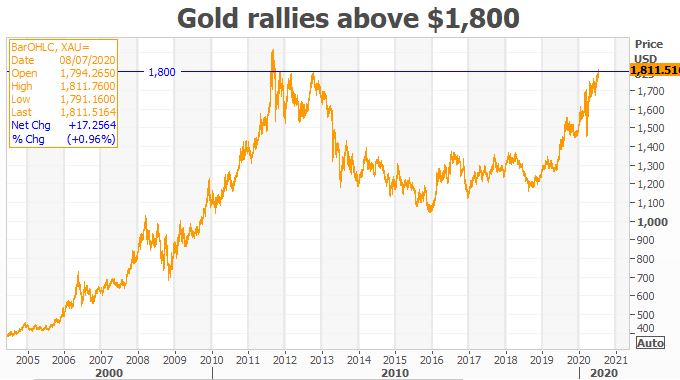 Why is it so “desirable”?  Yeah ok, it makes shiny rings and teeth and sometimes better than a pearl necklace.  But you can’t eat it.  Between 1980 and 2000 it lost around 80% of its value – so holding is not without risks.  More of that later…

One key reason is that it is homogenous – not matter where in the world it comes from, an ounce of gold is the same as any other.  Important.

Secondly – it is scarce and bloody hard to get to.   It has been a few years since last “audit” but 3 years ago, all the gold ever mined in the last 4,000 odd years would not form a cube that would cover a tennis court.  Best guesses there is another 25% of world stocks to be dug out if & when we find it. Lastly – and here is the kicker…..  It has always been known as a “store of wealth”.   Learnt that in school without really learning.

Back to 1980-2000 when gold had it’s arse kicked.  Why?  Massive 2 decades of economic growth where paper money was king.

Peter Costello was on telly recently fearing and bemoaning the likely degrading of our currency.  All roads lead back to the “Rona” virus.  Whilst business leaders and politicians crap on about the need to restructure our tax system and control budget blowout, the reality is that helicopter funding is the most palatable solution now and in the future.  That is…print more money and splash that baby around.

It has already started to happen – and most dumb-arses miss the vital point that if there is 30% more dollars floating around, then each dollar is by default only worth 70 cents in now spending money.  That is what arguably our best ever Treasurer foresees – and its hard to argue against it.

So what to do?  If anything above makes sense to you, then bung a few bikkies into gold stocks.  Or not – no advice / no commission.

Been watching Money Heist on Netflix – only entering season 2 now so no spoilers please.  I sense though that he plans to do just as we spoke above – “degrade” the euro….

Soundtrack is good too…