Could it get any worse?  Yes it can…

We missed last week.  No real reason other than we missed it.  Maybe feeling a bit like below. I had an interesting moment last week.  Alert beeped up on my phone.  It was another mass shooting in USA.  I quickly put my phone back in my pocket and carried on.  Only an hour or so later it struck me hard.  Mass shootings had been “normalised” for me in the USA.  How bad was that?  Crazy concept.  We were never that nuts, but hats off to Johnny Howard for his no nonsense stance on guns here.  What a legacy.

But a lot is going on.  When I started the series on political scandals, how did I know that the current government could beat anything from past history?  Will be interesting to see what Daggy Dad leaves behind as his legacy.

You can moan about woke political correctness gone made.  You can moan that “both sides are as bad as each other”.  You can bemoan the “Rule of Law”.  But any which way this has been an absolute shit-show.  How a government that has overseen a largely successful Covid plan, and has seen a very strong economic recovery, can now potentially find themselves in minority power and hugely unpopular, is a mystery to me. You can double this criticism if you factor in the ineffective piss poor performance of the Labor opposition.

Well it is a mystery if you exclude the inept handling of every controversy under the guidance of Captain Hillsong.

The floods on Australia’s east coast have been devastating, and I feel so much for the farmers that have endured years of drought, then fires and now floods.  Vision of dairy farmers in tears as their herd have been threatened and lost is heart breaking.

Politicians always enjoy a good disaster though – chance to stand tall.  ScoMo launched into action, helping stacking sandbags.  But rather than look “helpful” he just looked like a tool in a suit slowing down recovery efforts to get a photo taken.

I did like a suggestion for a new nickname for his – “Blister”.  Because, like a blister,.he only turns up when the hard work is done. Worse still, his Comm Car got stuck on the way back…  At least it stopped him from making a call on if Dr Laming was a “fit and proper person” to hold his spot.  I’m wondering if I still worked in a bank and got caught doing something illegal, but was about to do a big trade….would the bank keep me on (at least till I did the trade) or would it walk me out the door? The answer is, they would reluctantly walk me.  Why then does the highest office in the land not hold to such simple principals? Some feedback from the economic clock story last week.  Interestingly no one massively disputes “the time” as being close on midnight, but some believe that the stimulus and rates story can keep the wheels spinning for longer than I do.  I hope they are right.

On that, Bank of America did some research on the old adage that “it is time in the market”, and not “timing the market”.  It looked at returns over 10 years, and then overlaying that with exclusions for the best and worst 10 days in each decade. 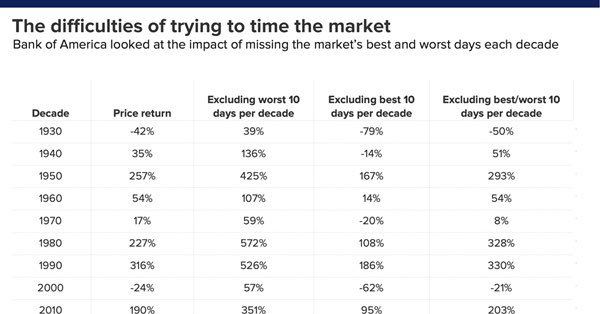 Coulda, shoulda, didn’t aside, it does also highlight your need to be in for the 10 best days as well.

So just maybe – my procrastination is a net positive.

Anyhow, the US equity market remains well supported.  Look at the chart below.  The white line is the Dow Jones Transport Index, and the blue is Zoom’s share price – both taken from the depths of Covid fears in May 2020.  Transport up 25% whilst Zoom down 35%. Whilst on transport, my mate Peter Dutton got some news that made him join the “desk polisher” brigade, when he heard that all boats had been stopped.  Unfortunately he didn’t get the full picture. The big bertha stuck in the Suez is four times as heavy as the Sydney Harbour Bridge, so it took some moving.

Westpac got punished this week for compliance breaches relating to liquidity reporting for NZ between 2012 and 2020.  Yes they did self-report, but this is one of the fundamentals of banking – knowing your liquidity position at all times, and stress testing for hard times.  Piss poor effort that.  I had a mate than ran liquidity for a foreign bank in Australia at the height of the GFC, and stories of how close they got to closing the doors due to technical insolvency was unbelievable, and little known.

The lack of this basic understanding is more pervasive than many would expect.  My sources tell me there is an ASX200 company that may be looking to sell one of its crown jewel divisions off for a tidy sum.  All good there, and maybe even a handy special dividend for shareholders.  But no research has been done on possible Credit Ratings effects on the company.  What happens to existing bond holders holding value, and what effects for re-issue when that companies bonds are next due for maturity?   The Board have a fiduciary duty to both bond holders and shareholders.  In fact you (and many Boards) may not realise that bond holder’s rank higher than shareholders on the company totem pole. Central Banks are sticking to the script.  Everything is just fine.

Australia’s economic and social relationship with China is going as well as when Black Swan divorced years ago.  No matter what you say or do, you are in the wrong.  We will have some special “insider” comments after Easter.

Commodity prices bouncing around, and the USD had a strong week as the Biden vaccine roll out accelerates.

Thus the AUD remain flaccid.  .7640 at present.  Medium term expectations for better commodity prices, and a weaker USD should see it back towards 80 cents.

The local economy though will be assessed and reassessed numerous times over coming weeks as JobKeeper rolls off.  Losses in tourism and hospitality are already baked into predictions.

Thought of the week.  Skools out on schools.

Out on a limb here, and maybe hoping everyone is too busy planning their Easter break to read on…

Background first – I fully understand that many/most readers here have had the fortunate benefit of a private school education.  In no way is this intended as a crack at your learned self.  In fact both of Black Swan’s cygnets have seen public and private education, so perhaps I have a rare non vested perspective.  The initial conversation happened at a pub on a Friday night, when a government educated journalist was in a philosophical debate with a staunch supporter of private education. I was simply a spectator.

For me though, this harks back to the role of government to supply the essentials of health, education, power and water.  Reviews of the appropriateness of privatisation for all but education are many.  But few tackle the how and why of private versus government education funding.

*I acknowledge that per student funding in the private sector is lower than for government funding.  No one backing removal of private funding has answered that issue to my satisfaction yet.  Volume discount…?

Further the journo asked if St Peters/Knox/Melbourne Grammar/St Joseph’s built their schools with government money or received government grants when they opened or in their early years.  The concession was a no – but times change.

The next phase was, “if I can or want to pay additional money to educate my children, surely that is OK?”  The journo answers. “Of course – but then why am I subsidising your choice?”

My main thinking was – are we getting a return on investment?  Hard to tell but a Victorian study in 2019 looked at nearly 600 schools of similar socio-economic demographics.  It would appear that the quality of teachers and application of students remain the key metrics.  Results as measured by VCE scores were very (very) similar. So purely on bang for your buck, government schooling stacks up. So why is funding of private schools increasing on a percentage basis?

I couldn’t find data for current government but 82% of Tony Abbott’s ministry was private educated.  8 out of 52 NSW Supreme Court judges actually went to the same school – Saint Ignatius.

On the basis of that summary I am wondering why I even bothered.  Then again that is the joy of a thought – it doesn’t always need a problem….. or a solution. “The ultimate Barossa blend, a barrel cull from the Blonde, Brunette and Contrarian, with 10 separate district parcels plus small amounts of grenache, mataro and old vine cabernet sauvignon. This has an almost airy lightness to its silky red fruit palate; there is no valid reason to hold back from enjoying the hell out of it right now. Great value.” – 95 Points & Special Value Wine James Halliday

We had with cheese and meats.   Two extra points for value.

PS – found this chart too – looking at the various harm scores for different drugs.  On that basis I will suggest to Mrs Swan that I switch to crack cocaine for health reasons….. I felt like going with “Rust Never Sleeps” to celebrate Australia’s ability to buy the only aluminium that apparently can rust for our new naval boats. China likes to give us grief, but they signed it off as OK.  Maybe that is their plan?

Anyway, I chose this one:

The opening guitar riff is really catchy.  Sounds like a Hammond organ in the middle.  After a couple of listens I found myself signing along.

Wow – what a catchy new release.  I so I thought.  Could not believe it was recorded in 1972.  Way too fresh a sound.  Looking Nolan Porter up on the net, he appeared to be somewhat spectacularly unsuccessful.  He died only last month.

Hope you enjoy your Easter celebrations.  As always watch out for frauds.  Left hand photo covers the “fraudulent” sale of an exotic bird, and the right hand covers my annual subscription to Drinkin’ and Rootin’.  Paid up and only got one edition.  Be careful.